Atlantic Salmon are classified as Salmo salar , with the root possibly originating from the Latin ‘salire’ meaning ‘to leap’.

Atlantic Salmon are a commercially valuable member of the salmonid family that lay their eggs, or ‘spawn’, in freshwater streams on both sides of the Atlantic Ocean, and then migrate back out to sea. Though its life history and appearance are similar to species of salmon in the Pacific Ocean, the Atlantic salmon is actually more closely related to the brown trout.

Atlantic salmon historically ranged from Portugal north to Greenland and south to the Eastern United States. Attempts to introduce Atlantic salmon to many other places around the world have failed, except in landlocked lakes in Argentina and the western United States and Canada. Commerical net-pen farming of Atlantic Salmon is a major environmental concern due to the impacts these operations can have on populations of wild fish and the local marine habitat.

Average adult fish weigh 3.6 to 5.5 kg (8 to 12 lb) and reach about 75 cm (30 in) in length, but Atlantic salmon can obtain weights of up to 38 kg (84 lb) and lengths of almost 1.5 m (5 ft). At sea, the fish are blue-black with silver undersides. As they approach freshwater to spawn they turn red, sometimes almost black, and males develop an exaggerated upper jaw in preparation for fighting over females.

Unlike salmon species of the Pacific that spawn once and die, Atlantic salmon spawn over several successive years. Fish may swim more than 1600 km (more than 1000 mi) back to their streams of origin. During the spawning season in the late fall or early winter, a female digs a nest, called a redd, by turning over on her side and vigorously excavating the gravel streambed with powerful strokes of her tail. Males fight for the opportunity to spawn with females. As the female deposits an average of 5500 to 9500 eggs into the nest, a male sprays milt (sperm) over them. The female covers the nest with additional gravel to protect the eggs. Then both parents swim back to sea, leaving the eggs to hatch on their own.

When the larval fish hatch they stay hidden in the gravel, nourished by a yolk sack attached to their bodies. When the yolk is absorbed, the fish emerge from the gravel and begin feeding. The young feed on insects and insect larvae in rivers. As the fish migrate to sea they switch to a diet of progressively larger fish. Atlantic salmon stop feeding temporarily when they return to freshwater to spawn, surviving instead on reserves of fat and protein. 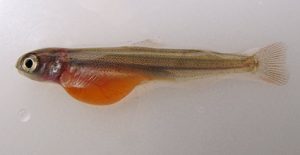 Most native Atlantic salmon populations are declining in number or gone due to over fishing and habitat destruction. Wild populations have fallen to less than a quarter of what they were twenty years ago. In the United States, the last remaining stocks are found in Maine. A proposal to list Atlantic salmon as an endangered species under the Endangered Species Act was withdrawn in late 1997 in favor of a conservation plan proposed by the state of Maine. Efforts to restore wild salmon runs south of Maine have been unsuccessful.

Atlantic salmon are raised commercially in net pens in Norway and on the west coast of North and South America. These salmon are sometimes referred to as farm-raised salmon. On the west coast of the Pacific, there is the danger that if any Atlantic salmon escape from the pens, they may take over the habitat of native Pacific salmon. There are additional concerns of disease transmission to wild fish. As a result of the escape of over 800,000 Atlantic Salmon from a commercial net pen operation in Puget Sound in 2017, legislators in the state of Washington have passed a law banning the rearing of Atlantic Salmon in the state, effective when current operating leases expire in 2022.